Leverage in a consultancy business – a worked example

With the previous blog, I hopefully got across just how central the concept of leverage is in your forming plans – it impacts how you serve your clients, how your team will grow and, fundamentally, your potential profitability.

Perhaps the best way to step you through the process of actually planning your leverage structure is to take you through a worked example – of my attempt at this when I penned my original start-up plan for Moorhouse.

First off, against the three types of client service work I have just described, I envisaged that Moorhouse would be best structured along the ‘grey hair’ variant. I was positioning the firm to be the preferred partner of a client seeking support in complex, large-scale transformation programmes. Such work required experienced practitioners first and foremost.

Next, I conjectured that a typical ‘grey hair’ client project (for example, the establishment of a programme management office for a client) could feasibly be structured as follows: 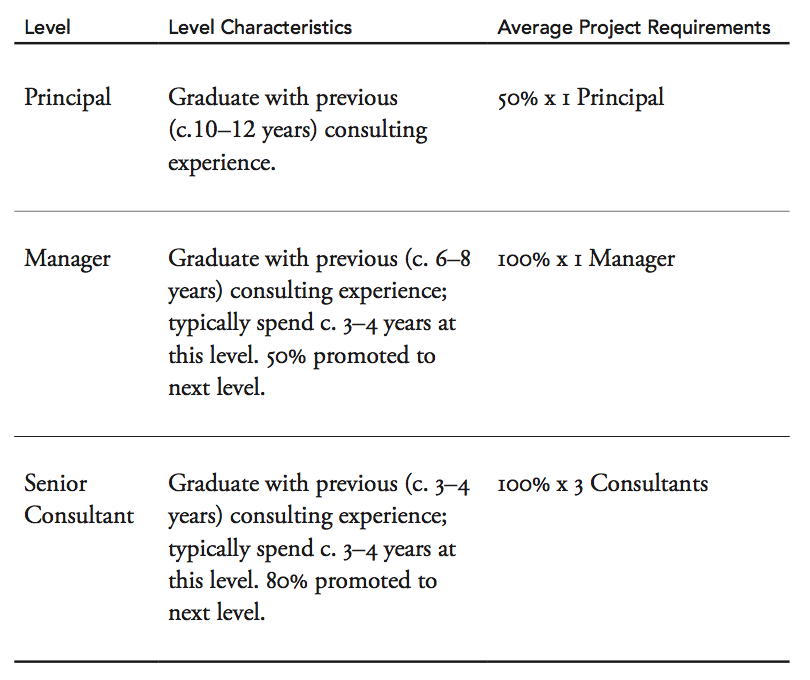 This structure was also grounded in a desire to grow an organisation that was relatively ‘flat’ (i.e. only three levels initially) and with a clear promotion path through it. This latter concept was key in terms of attracting, and motivating, the requisite calibre of colleague I sought.

Next, I needed to consider target utilisation for each level; this resulted in the following proposal:

With these organisational design parameters set, I could estimate that to run, say, four consecutive projects, would require the following staffing composition:

This gave me an indicative leverage structure of 1 Principal: 1.5 Managers: 3.75 Senior Consultants.

I knew then that to attract the right calibre of staff (i.e. consultants motivated to progress through this business structure), I needed to ensure that the promotion timetable was achievable. This, in turn, demanded a certain level of firm growth to allow for these professional development opportunities. Indeed, this is a fundamental aspect of a professional service business. Growth per se does not lead to greater profitability (if the same owner-to-staff leverage structure is main- tained). Growth is, however, a pre-requisite if talented staff are to be attracted to, and rewarded within, your firm.

I moved next, therefore, to how this structure could be developed, with initial ‘block’ recruitment in year two and subsequent recruitment/promotion along the lines presented. The numbers against the arrows show the transfer between levels of promotees.

Clearly, such an initial model was a simplification (for example it did not account for any staff attrition or – at least – assumed any such staff loss would be regained in year) and was predicated on revenue growth opportunities being secured from the off (significantly so in year two). Notwithstanding all this, it provided an invaluable reference baseline.

Flowing this leverage logic through, the pyramid below shows how I wanted Moorhouse to look in our year five. 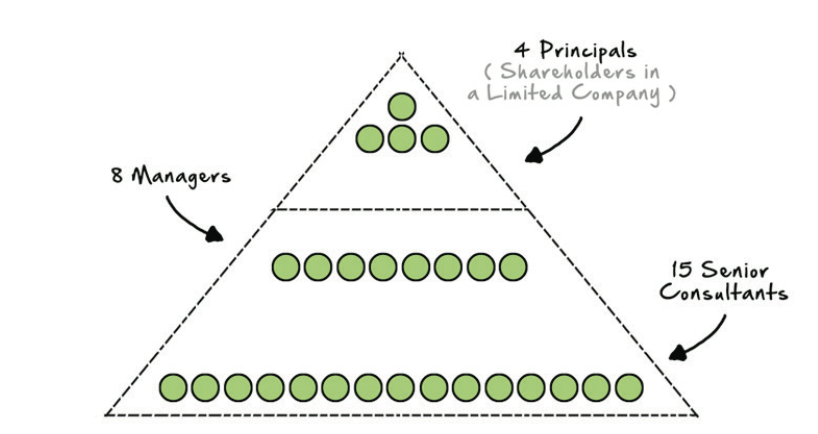 All this planning was based on client service practitioners solely; I projected also a requirement for a supporting infrastructure team (envisaged as c. 4–6 staff).

This then was the organisation growth schedule that predicated much of the financial analysis of my original plan. It is a form of internal, bottom-up logic; that is you are designing growth as a function of what it needs to look like to sustain the right level of service for your intended clients, the right level of career development for your future colleagues, and, the right levels of overall profitability. Self-evidently, this all needs to be ‘pressure tested’ against a top-down analysis (is there sufficient demand?) before you become settled with it; notwithstanding, it is absolutely critical you plan with these leverage dynamics in mind.

And, how did we fare against this plan? Well, we smashed these projections. I arrived at the year five projection at the end of year two! I make this point, however, not to undermine my point about planning but to reinforce it. Without such foundation planning, I wouldn’t have had a target to march towards or a leverage design to manage to. I doubt whether the best of my team would have been sufficiently attracted to the firm in the first place if this form of career development planning was not in evidence. Indeed, we may well have misfired on the client delivery side of the equation had this been poorly thought through. In summary, leverage planning was key and it sits at the heart of your forward success too.

*1 At this start-up stage, I envisaged the principal grade being the senior-most grade (in which the company’s owners would reside). In the fullness of time, I actually introduced the fourth grade of director to make this ownership (and board role) distinction.

*2 It should be noted that when we introduced the director level (as the primary ‘finder’ grade), the utilisation target for principals was raised to adjust for the fact they were now the main ‘minders’ in the business.